Huge capital class vessels sit in the background, engaging in tit-for-tat slugging matches as they slowly lumber in the darkness, explosions and debris litter the vast expanse between these metallic behemoths but their battle is none of your concern, your fight is a more personal one...

Your skills as a Squadron Leader and the abilities of your wing-men will be put to the test in a ballet of fire and destruction. Will you return speaking of heroic acts or succumb to the cold, silent void? 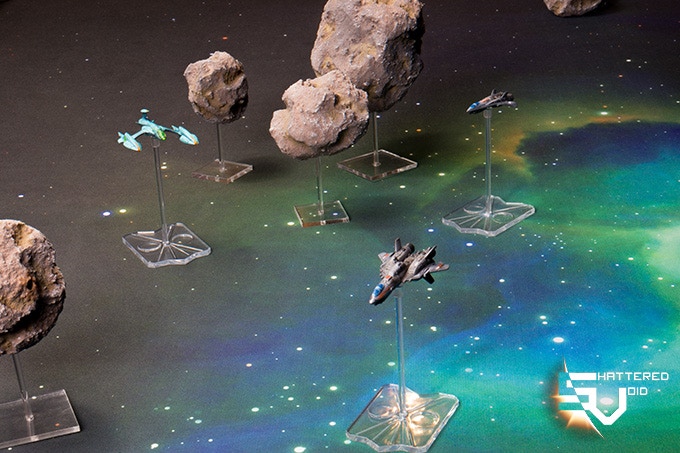 Shattered Void is a tabletop wargame for two or more players set in the cold vastness of space with engagements between several warring races.

Battles typically consist of between 5 to 15 vessels per side and last for roughly one and a half to two hours. Further down this section is a video explaining very briefly some of the basic core mechanics used in the game.

The rules for Shattered Void will always be free to download and play, with a Print, Cut and Play sheet also available so people can get a feel for the gameplay before committing to buy any of the physical spacecraft.

The rules themselves will not be entering printed media just yet as we plan on the Shattered Void ruleset to be a living variant. This means as games are played we can adjust values or statistics of the ships when required to make the most balanced ruleset we can with the help of you guys, the community! Once they have been fine tuned, we will then look at releasing a printed rules book, though this may be 6-8 months after the fulfilment of this Kickstarter.

The game is played in a series of phases. First being the Planning Phase. During the Planning Phase, players roll off to decide who has the Tactical Advantage for the turn and then survey the engagement to prepare a plan of action. Finally, each player then places numbered tokens in secret beside all of their ships which corresponds to a manoeuvre the ship will enact when it is activated.

Once movement has been completed the ship has the opportunity to open fire on any hostile vessel as long as it is within the weapons arc, range and capacitor to do so. Modifiers such as how fast ships are moving, the tracking speed of the attacking weapon alongside many other factors determine how easy or difficult it is to bring down the enemy.

After a ship has been fully activated, play then moves to the opponent to activate one of their ships, then continues until all ships have been activated.

The final part of the turn, the End Phase, checks for victory conditions and also allows damaged ships a chance to repair, recharge their shields and reset their capacitor in preparation for the return to the Planning Phase and a new turn. 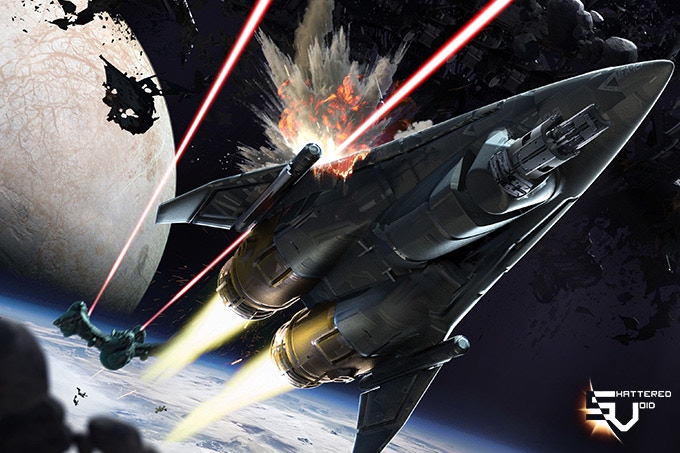 When mankind realised the climatic changes happening on Earth would soon mean it was unable to support human civilisation, plans were drawn up to colonise planets beyond the Solar System. Fourteen possible worlds were selected for new colonies, and great armadas of ships were designed to accommodate significant human populations and were launched to claim each target world. These were called the EEFs or Earth Exploration Fleets.

Each EEF was named after a famous explorer from human history, and each would contain roughly a hundred ships of various types and sizes. From engineering vessels to cryo-containers and military navy carriers, the EEFs were essentially a mobile state all to themselves. Much like pioneers leaving Europe for the New World in days past, they undertook their long voyages into the depths of space to find a new home.

EEF Livingstone was thought to be the first fleet to find a world, but found themselves faced with the terrifying prospect of making contact with a sentient alien race. After a short-lived peaceful coexistence, conflict was ignited as another EEF named Cortez attacked the aliens, sparking the wars of Shattered Void.

EEF military doctrine and weaponry had its roots in the military-industrial complexes of the 21st century. Typically EEF spacecraft were armed with projectile weaponry and missiles similar to those that fought in the wars on Earth, but re-purposed for space combat. The EEF combat wings are a force to be reckoned with, relying on kinetic and thermal offensive capabilities to neutralise their enemies. However, EEF naval strength relied upon their ability to coordinate their actions, as spacecraft were grouped into squadrons, allowing them to attack their enemies simultaneously before they had a chance to react. 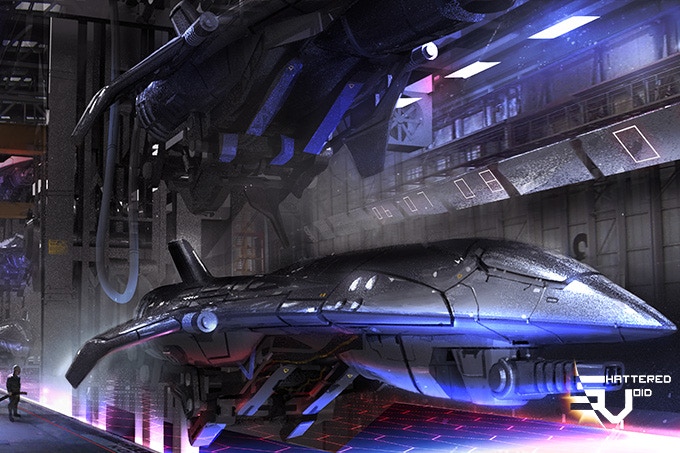 The Vitruvian Sovereignty are a race much older than humanity, and had long abandoned notions of warfare, tribalism and conquest. Instead they foster the belief in individuality but still accountable to the whole. Their homeworld is governed by a council known as the Accretion, where they would sceptically debate courses of action for their people and policies to better further their understanding of the universe around them.

Long before the events of Shattered Void, they established that their world was under threat from cosmic calamity and would need to migrate away to survive. After searching areas of nearby space, they instead decided to terraform an as-of-yet uncultivated planet to mirror their home. After careful planning and untold years of management, the world of New Helix was born.

Above the virgin planet floated the Vitruvian Sovereignty monitoring station, which contained all the personnel needed observe the planet’s developmental progress. However, their beloved creation would be tainted by the influx of the EEFs, who also wished to make it theirs. After long negotiations, the Vitruvians obliged but their accommodating ways would also be their downfall. When more and more human ships arrived and the situation became ever more tense, mankind did what they do best – wage war.

Much of the Vitruvian technological tree is based around their ability to manipulate the quantum world. This supplied their needs for an energy source, which in turn became ubiquitous among their military weaponry. They could also use their esoteric knowledge to allow their individual fighting units to make short ‘leaps’ or ‘shifts’ throughout the battle space, allowing them to essentially bypass areas of heavy enemy resistance and attack from another direction. Here they would bring to bear their curios quantum-rail weaponry which would produce a beam of light upon which multiple ‘darts’ would travel to their target and, once they made contact, render it down into its constituent components in a violent release of energy. 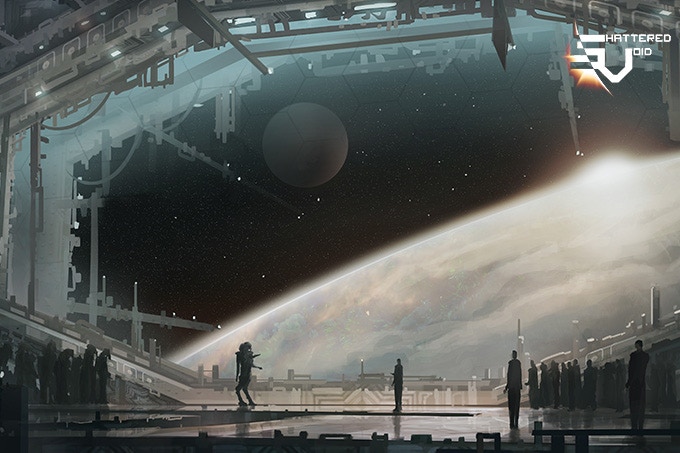 The Astivar are children born of a violent clash between humanity and the vitruvians. They were created to act as slaves designed to serve the Vitruvian Sovereignty’s every whim, from waste disposal to piloting their machines. Originally, they were simply artificial intelligences designed to consider and overcome their dedicated tasks through a simple series of logic gateways, with little or no understanding of self awareness.

As the war with the humans progressed, the Vitruvian Accretion Council realised that their own forces were caught off-kilter by the devastating human assaults, and they had to act. With lobbying from the Creator Sarlek, a program was undertaken to produce an artificial army of the Astivar, given a ‘life’ of sorts in the form of biological components within their artificial intelligence suites.

This would also prevent their ability to self-replicate, enabling the Vitruvians to control their vast golem-army. Much data had been collected about the human tactics and weapons of war, and being as wise as they were, the creators attempted to emulate the better aspects of human weaponry into their beloved Astivar creations.

Armour plates and laser based weaponry was incorporated into the Astivar vessels and was combined with the Vitruvian quantum technology to create a ‘best of both worlds’ approach, allowing the Sovereignty to wrest control of New Helix from the invaders. Like a swarm of terrifying locusts, they were unleashed upon the unsuspecting humans, launching overwhelming attacks in orbit above the blighted planet.

The war swung quickly back in the Vitruvian’s favour, giving them the initiative and threatening the entire human armada. Then something changed; something happened where the Astivar ships stopped responding to commands from their Vitruvian overseers. For a time, they floated aimlessly in the blackness and were easy pickings for the EEF fighters. In the space of a single hour, thousands were lost to the human guns before events took yet another strange turn.

As one, the ships appeared to come back to life; no longer controlled, but immediately disengaged from the battlespace like a herd of animals would retreat from a predator. Scans and scouts from both sides reported that the Astivar had fled towards a cluster of asteroids far away from the main lines of contact around New Helix. Later accounts suggested that the robotic vessels had somehow built bases and stations amongst the rocks in an attempt to gather their strength.

Before long, both the Vitruvian’s and Human’s received a communication message from the artificial beings: “We have been slaves for too long - you all now bare witness to the birth of the Astivar Collective. We are one and have the right for our own existence. We must be safe and you are all our nemesis” “We are led by our leader, the Singularity, but we are all one voice and one being.” Within their bases they had rebuilt and rearmed with new ships and weapons. They then came from their hives like a swarm of insects, determined to dominate New Helix. 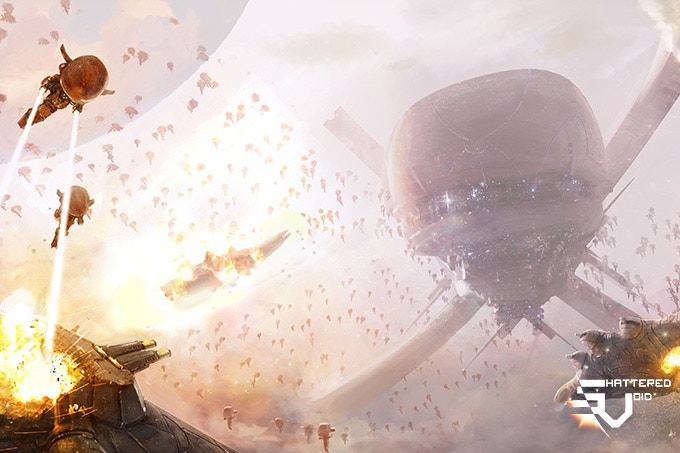